Samsung Gets Futuristic with Patent for Foldable-Display Smartphone

While Apple is busy keeping customers entranced by the iPhone 7 and the Watch 2 models, Samsung is attempting to entice customers with a new type of unconventional phone that sports an outlandish and compact design. Due to the number of relevant patents granted to them (along with advancement in OLEDs), it appears that the company is aiming to manufacture foldable-display phones.

While Samsung’s current designs for the Galaxy S7 and S6 have the “edge” display (a slight wrap around display that encroaches on the edges of the device), the latest patent granted to Samsung details more plans for a smartphone that can fold with ease. According to Stuff.com, this is due to “an innovative hinge system allows the screen to fold up into a little pocket, where it curves around and avoids being fully bent or creased.”

According to the patent, the smartphone design comes with some handy and desirable tech features. For instance, the patent details how the device’s port is hidden except when the device is folded. In lieu of this, the patent also shows the device charging folded up in a stand-up charging device. However, as noted by multiple sources, this keeps you from using the device while it charges.

At this year’s Display Week 2016, sponsored by The Society for Information Display, Samsung showcased a display that was “rollable,” easily hiding away in a metal cylinder that measured 10mm in diameter. And at only 0.3mm in thickness and 5g in weight, the impressive OLED display was a sight to behold. So it makes sense that this tech would pair nicely with the folding smartphone design. 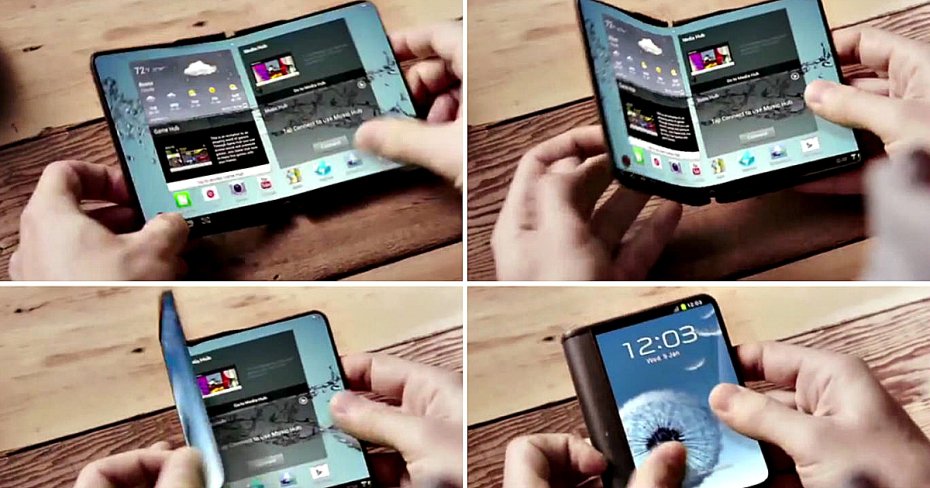 Competitor LG is apparently chasing flexible displays, too, and already teased a flexible display in January at CES 2016. Apple is also in the market for flexible phones, and was granted a patent for “flexible electronic devices” earlier this year.

So when will we see these foldable designs in action and in the hands of consumers? It’s hard to say. Rumors first surfaced early on last year, and Samsung has been working hard on foldable devices for quite some time (according to the archives and patents assembled on Patently Apple). Select sources say that the foldable design will appear as one of the next Galaxy models, which are set to debut in 2017.

How does a foldable smart flip phone sound to you? Let us know in the comments below.