Huawei on Wednesday launched the its P9 flagship smartphone in India. While the company was anticipated to bring the larger P9 Plus variant to India as well, it hasn’t done so. The P9 has been priced at Rs. 39,999, and will be available exclusively via Flipkart at 3pm IST from Wednesday itself.

The Huawei P9 variant launched in India bears 32GB of inbuilt storage, which is expandable via microSD card (up to 128GB). To recall, a 4GB of RAM/ 64GB of inbuilt storage variant was also unveiled at the global launch, but has not been brought to India.

Connectivity options on board the Huawei P9 include 4G LTE, Wi-Fi 802.11 a/b/g/n/ac, Bluetooth v4.1, Infrared, and USB Type-C. The company has launched the smartphone in its Ceramic White, Prestige Gold, and Titanium Grey colour variants in India. The smartphone features a 3000mAh battery. The company is also touting a VIP service with 2-year warranty, 3-month screen replacement warranty, and a pickup and drop service.

As for those wondering what they’re missing out on with the Huawei P9 Plus, which for now hasn’t been brought to the country, there isn’t too much of a difference. It sports a larger 5.5-inch full-HD Super Amoled display (with Pressure Touch technology), comes in only a 4GB RAM and 64GB storage variant, and bears a 3400mAh battery.

At the event, the company also announced the Stainless Steel edition of the Huawei Watch will go on sale in India via Flipkart at 3pm IST in India, at the same Rs. 22,999 price of the original. 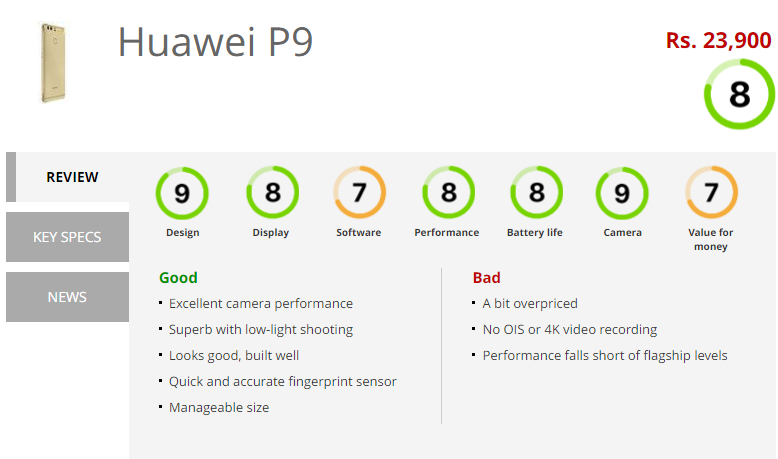