Originally brought to market back in 2002 as an education sector desktop computing solution, Apple’s eMac — more formally referred to as the “education-Mac — was, for its time, a classic yet marvelous innovation in desktop computing.

Of course, the eMac only enjoyed a short run in Apple’s otherwise extensive, 40-year history — having ultimately been sandbagged just four years after its initial debut. However, even despite its relatively short stint in the limelight, Apple’s eMac ultimately proved to be a commercial success — both in and out of the classroom, as essentially everyone wanted to have it on their desks.

Fast forward to the present day, however, and the eMac seems almost archaic when compared and contrasted with Apple’s current line of ultra-thin, sleek and slender, aluminum body desktop and notebook computers — many of which feature industry leading display technologies, wireless peripherals, and innovate, first-of-its-kind engineering breakthroughs, such as Force Touch and blazing fast Thunderbolt connectivity.

Even still, Apple’s inherent line-up isn’t about to deter die-hard eMac fans from dreaming beyond the scope of what most might consider “realistic.” And apparently it hasn’t, as several of the clever minds over at Curved have brought to the table what they envision the 2016 eMac would probably look like, today, had it lasted another decade in the limelight.

Their concept stays true to the eMac’s classic and iconic, teardrop design aesthetics, while combing those elements with the Silicon Valley tech-giant’s more recent design patterns, materials, and color options.

Of course, this is all for the sake of fun and dreams, you know; we’re almost certainly never going to see this unit come back to life, let alone, in this form — especially after all these years and all of Apple’s game-changing, technological innovations. But it’s still interesting to see, we think, and definitely gives us a little bit of fresh perspective on one of Apple’s early millennium commercial success stories.

Check out the video below to see the “2016 eMac” in action for yourself!

As you can see from the Curved renderings, their eMac remains consistent with the design elements of both the original eMac, as well as the colorful iMac that was introduced prior to that — when Steve Jobs initially returned to the beleaguered company in 1997. It features the same teardrop shaping, but boasts a considerably narrower monitor atop a wide base — which, perhaps for obvious reasons, is probably more inconsistent with Apple’s inherent, slim-it-down, thin-is-in design philosophy. 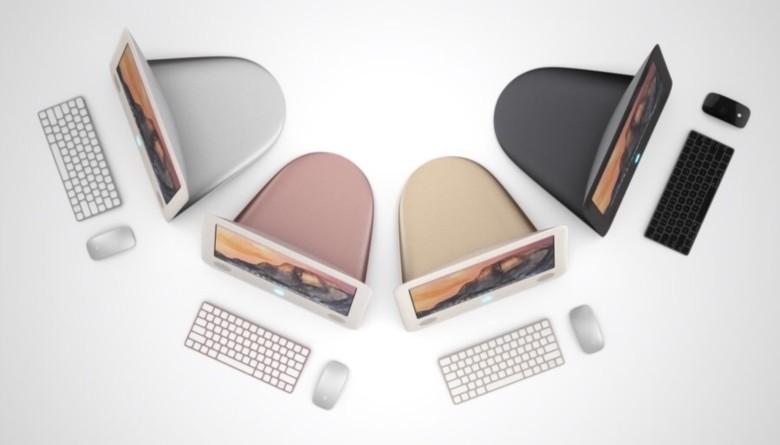 In terms of specifications, Curved envisions the 2016 eMac would boast a modest 17-inch monitor, while also featuring many of the same internal components of Apple’s current, wildly successful iMac line. Of particular interest, however, the Curved version also appears to feature a capacitive touchscreen, which is perhaps the most intriguing element of all.

Finally, the eMac according to Curve would likely be offered in the same Silver, Space Gray, Gold, and Rose Gold color options of the current iPhone and 12-inch MacBook, in addition to several “iMac Legacy” color options — such as Pink and Blue.

Curve is a group of concept artists, well known for their often far-out, futuristic Mac designs. However, for what it’s worth, this one, in particular, appears to be the most grounded and conceptually plausible rendering that has emerged from them in recent years. Yet, at the end of the day, it’s merely a concept — nothing more, nothing less.

What do you think about Curve’s “2016 eMac” concept? Could you see yourself putting one on your desk?