It’s not surprising – even to Apple – that sales of the iPhone 6s handset have been somewhat lackluster thus far. After all, the company openly admitted that it expected iPhone sales to slowly taper off during the first half of 2016. This prediction turned reality, at least in part, is due to a progressive maturation in the high-end smartphone market;however, it’s also just as likely due to the fact that Apple’s iPhone 6s is an intermittent handset – meaning that it’s one of those awkward, “in between” models, featuring just a few, minor upgrades over the iPhone 6 as opposed to a complete revamping in design and capabilities, altogether.

That said, we know beyond the shadow of a doubt that consumer expectations for the iPhone 7 are quite high this year – as many users have reported intentionally sitting on the sidelines last year, knowing that Apple’s whole-number upgrades are historically much more significant than the company’s ‘s-model’ handsets.

However, as the results of a new survey conducted by the research arm of British bank, UBS, suggest, the anticipation among users for Apple’s forthcoming iPhone 7 is considerably higher than was the case for last year’s iPhone 6s.

UBS, one of the largest British investment banks to also conduct sell-side analysis surveys, recently questioned a whopping 6,336 smartphone users in the largest of Apple’s markets – which include the United States, U.K., Germany, China, and Japan. 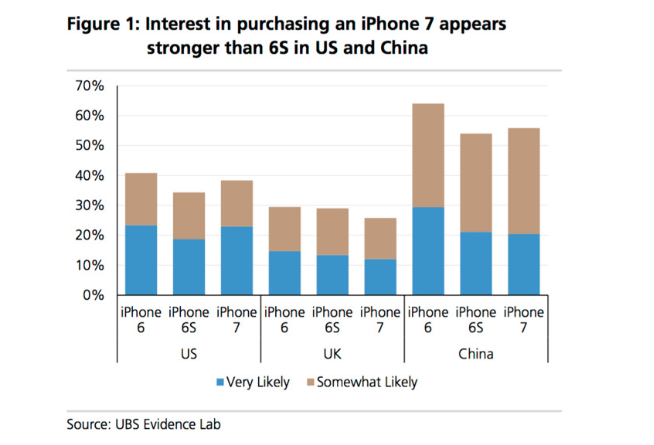 The survey question was simple – “how interested are you in Apple’s 2016 iPhone 7?” Surely enough, users in Apple’s two largest markets – the U.S. and mainland China – reported, on the whole, that they were considerably more excited for the company’s iPhone 7 than they were for last year’s iPhone 6s.

Perhaps this isn’t the most surprising revelation, though, right? After all, as we mentioned, the iPhone 6s was simply an “in between” upgrade – a modest, sequential evolution over the blockbuster iPhone 6 that preceded it. Also sure to fuel the flames of speculation and anticipation – as rumors about the Cupertino-company’s forthcoming iPhone 7 continue to saturate the web, we’re learning more and more about what might be looming just over the horizon.

The iPhone 7 is, from what we can ascertain thus far, expected to be a major upgrade over the iPhone 6, and even the 6s. For starters, Apple could potentially be ditching the standard 3.5mm headphone jack, altogether – thus paving the way for a rumored 6.1mm thinness. Moreover, iPhone 7 could feature a physical redesign, dust-proof and water-proofed outer casing, a better display, and so, so much more. There really is a lot on the table, insofar as what Apple COULD do – but the question, of course, is what WILL the company do in order to satisfy these eager customers?

Well, we don’t know that much, as of yet; but if history has taught us anything, it’s that Apple could very well have another game-changing iPhone up it’s sleeves. We’ll just have to wait and see, unfortunately, until the device is officially unveiled later on this fall.

Are you excited for Apple’s iPhone 7? Let us know in the comments!