According to figures from Geekbench, the Microsoft Surface Pro X sports the SQ2 ARM processor, which is based on the Snapdragon 8cx. However, what makes the benchmarking scores interesting is the fact that you can’t yet natively run Windows 10 ARM on the M1.

Developers have worked around this by getting the M1 to run a virtualized instance of Windows 10 ARM. The biggest disadvantage of virtualized instances is the performance penalty as compared to running the OS natively. But as the benchmark shows, the virtualized Windows 10 is actually considerably faster than it is running natively on the Surface Pro X.

Last week we reported that you could now run Windows (and Linux) on the Apple M1 Macs thanks to Qemu, the open source emulator and virtualizer. 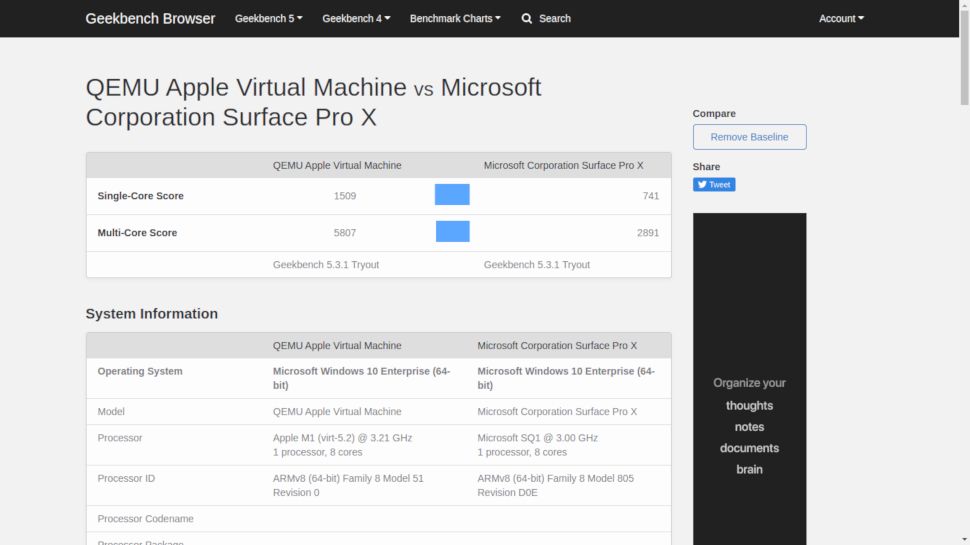 Running Windows 10 inside a Qemu virtualized environment, the Apple got nearly 5807 points, while the Surface Pro X trailed behind at 2891 points. The figures are even more impressive when you consider the fact the virtualized environment hasn’t been optimized. Expect the figures to get even better when Parallels releases its Desktop for Mac virtualization software that’s tuned for the M1.

While you should take benchmarking scores with a pinch of salt, there’s no denying the performance advantages of Apple Silicon.