Canon Takes Down image.canon After Photos and Videos Go Missing

Canon’s new ‘Camera Cloud Platform’ image.canon hasn’t been up very long, but it’s already experienced its first critical failure. The site has been taken down pending an investigation after “some original photo and video files” that were marked for long term storage were “lost.”

First announced in February, image.canon is billed as a “camera cloud platform” that allows Canon shooters to sync their image library across devices and store some files in the cloud long term. It has/had three main features:

Automatic Image Uploading – Beginning with the EOS R5 and R6, future Canon cameras will be able to automatically upload full-quality stills and videos to the platform when connected to WiFi. Full res files will be saved for 30 days, after which you’ll still be able to access a 2048px thumbnail.

10GB of Long Term Storage – You can select up to 10GB of photos and videos to store longer than 30 days.

The idea has received a lot of positive attention online; however, on July 30th, the site went down without notice. Users were greeted by a cryptic message that read, simply: This service is currently not available. We apologize for the inconvenience this may have caused you.

In a notice posted to what used to be the image.canon homepage, the company says that an issue with the 10GB long-term storage feature led to the loss of some photo and video files, and the site has been taken down indefinitely pending further investigation into the problem: 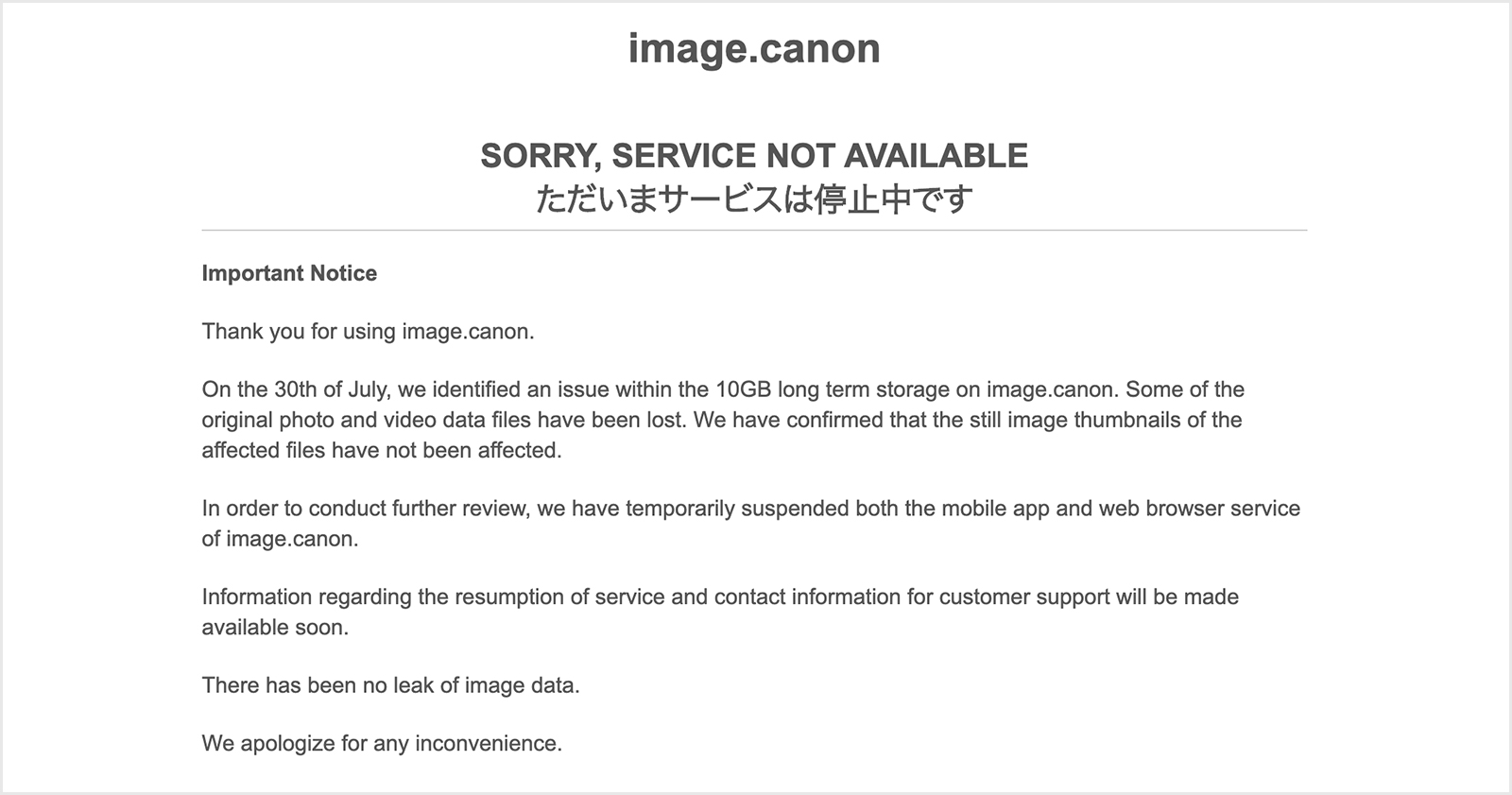 “On the 30th of July, we identified an issue within the 10GB long term storage on image.canon. Some of the original photo and video data files have been lost. We have confirmed that the still image thumbnails of the affected files have not been affected,” reads the statement. “In order to conduct further review, we have temporarily suspended both the mobile app and web browser service of image.canon.”

Based on the statement, it’s unclear whether these lost photos and videos affected every single user file marked for “long term storage” or if the problem was limited to a smaller number of photographers. We’ve reached out to Canon USA for comment, and will update this post if and when we hear back.

In the meantime, Canon wants to assure users that no files were “leaked,” and info about when image.canon will be live again should be posted “soon.”